A critical component in accurate prostate tumor diagnosis and appropriate treatment is the ability to efficiently biopsy specific areas of the prostate. It’s estimated that over 1.5 million prostate biopsies are performed on men each year. As many as 1 million of them may be unnecessary1. Until now, conventional biopsies have been the standard of care when prostate cancer is suspected.

The issue is that a conventional biopsy can miss 30-40% percent of cancers2. Likewise, a conventional prostate biopsy may detect tumors that are not clinically relevant and could be just watched or at least treated less radically.

The problem is that conventional prostate biopsy technology has not changed much over the last 20 years. The procedure is performed using a handheld Ultrasound probe that provides only a small and often cloudy view of the prostate. In some ways a conventional prostate biopsy, though systematic on both sides of the gland, is a “blind” procedure that relies on probability (or sometimes even guesswork) as to the locations of the biopsy sampling.

Now thanks to Artemis, new technology from Eigen, physicians can fuse MRI and TRUS images to confidently sample precise areas of the prostate and to record biopsy locations for future reference in their diagnosis and management. While several other imaging modalities have been tested, most are cumbersome, expensive, and in some cases expose the patient to additional radiation or an inordinate number of biopsy samples.

The Artemis-MRI/TRUS Fusion function can help provide physicians and patients with more information about the exact location and extent of the disease. The result can lead to a more accurate diagnosis along with better information to help make a smarter, more individualized choice about prostate cancer management and follow up.

Today’s next generation, advanced MRI technology is combined with the Artemis device and standard ultrasound to produce high-resolution 3D images that can distinguish between normal and diseased tissue to help precisely pinpoint potential cancerous cells within the prostate. The result is better ability to identify and characterize prostate cancer, especially important in today’s changing landscape of smaller, lower risk tumors.

By fusing the MRI and live ultrasound images, a urologist can more effectively perform a targeted prostate biopsy of select tissue revealed by MRI imaging3. That means physicians and patients have the confidence that the tissue samples come from locations identified as highly suspicious. The result is a true TRUS targeted approach vs. the “blind” approach of a standard TRUS biopsy. 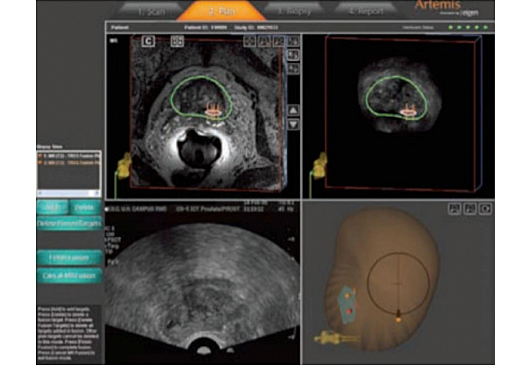 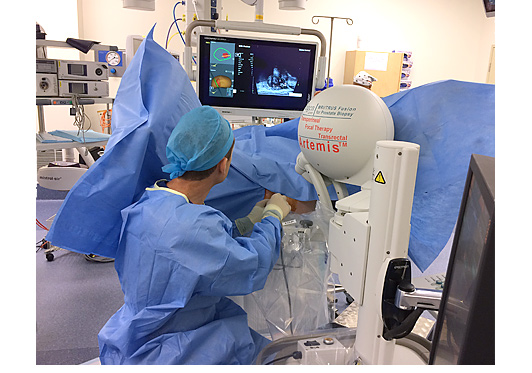